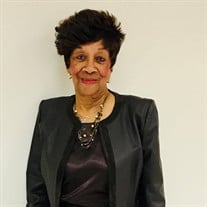 Sylvia Louise Cooper, beloved daughter of the late Charles William Hall and Anita Smith Hall, was born on August 17,1939, in Baltimore, Maryland. She was the fourth-born of six children. Sylvia was raised in a Christian family. She was christened at Ames Memorial United Methodist Church, where she was a part of the Youth & Adult Choir and remained a member for many years. God called Sylvia home, to Him, on November 15, 2021. Sylvia received her education from Baltimore City Public Schools. In her younger years, she was very active and athletic. In middle school, Sylvia won a Gold Cup Championship Award for roller skating. She also participated in several track and field events at Baltimore City’s recreation parks. Sylvia loved baseball and was a member of Easterwood Park’s team for girls. She graduated from Frederick Douglass High School, then went on to attend Baltimore Community College for several semesters. Early in her professional career, Sylvia worked as a substitute teacher for Baltimore City Public Schools. She then moved on to be employed at The State of Maryland’s Rosewood Center. While at Rosewood, she finished her studies at Baltimore Community College’s School of Nursing and was certified as a Licensed Practical Nurse. A dedicated state employee for twenty-five years until retiring, Sylvia cultivated several long last friendships through her time at Rosewood. During her high school years, Sylvia met the late George Leroy Evans. Thus, began a romance that blossomed into their marriage in 1960. Through this union, she became a devoted stepmother to Mark and Michael Evans. Sylvia and “Georgie”, as he was affectionately known, were very popular and well known in the Baltimore and New York Night Club Circle. They traveled extensively and attended many social affairs and events. They also entertained many popular Baltimore figures, such as Baltimore Colts and NBA Basketball players, in their home. Sylvia and Georgie worked very hard and continued a happy marriage until his passing in 1973. Several years later, Sylvia had a brief marriage to the late Ralph Cooper. Sylvia had a great sense of humor and an infectious laugh. She was always telling jokes and was the life of the party. She had great love and affection for all her nieces, nephews and other family members which was shown through her time spent with them, showering them with presents and monetary gifts on many occasions. Sylvia was known for advising them to, “meet me at the fountain” in Mondawmin Mall for their gifts. She was so selfless and giving and treated them all like her children. She maintained a long-standing friendship and bond with her niece, Airuell Hall, since childhood. Sylvia had a youthful spirit, memorable personality and was very fashionable. She enjoyed watching her stories and everyone knew not to call her while they were on. Some of her favorite TV shows were Ellen, Wendy Williams, Dancing with The Stars, American Idol, The Voice and The Masked Singer. She also enjoyed watching award shows while critiquing the celebrities’ attire and performances. She loved completing crossword puzzles in her spare time. Sylvia also enjoyed her monthly outings to handle her affairs at her favorite mall, Mondawmin. Restaurant outings with family and friends to celebrate birthdays were also her favorite. While out, she would reiterate the importance of being a generous tipper, as she remembered being a waitress in her younger years. She was known for her healthy eating habits and would also encourage others to watch their calories and/or sugar intake. Her favorite low-calorie drink was a Bloody Mary. Sylvia adored Michael Jackson. So much so that his “P.Y.T.” song was her ringtone, and he was saved as her screensaver. She was also a very prompt and punctual person, always inquiring about her “pick-up time” several days in advance, if you were her ride to places, appointments and/or events. Sylvia was forever grateful to her sister-in-law Rosa Hall, Cherie Thompson, Erica Kells, Ashley Roberts, and Candice and Jay Thompson for their kindness and consideration given to make her life comfortable. She resided with Rosa for many years, until she was called to her final resting place Loved ones who preceded her in death are: First Husband, George Evans and Second Husband, Ralph Cooper; parents, Charles William Hall and Anita Smith Hall; sister, Shirley Johnson; and brothers, Charles Hall, Jr., Donald Hall and Robert Hall. She leaves to cherish her memory: Sister, Gloria Hall-Gantt; Stepson, Michael Evans; Nephews, Charles Otis Hall, Jr., Gregory Johnson, Samuel Johnson and Jerry Charles Hall; Nieces, Syeeda Gantt-Holly and Airuell Hall; Sister-in-laws, Irma Hall and Rosa Hall; Best friends, Doris Gilliam, Joyce Burton, Jeanette Washington and Sheila Wallace and a host of great nieces, great nephews, cousins and other relatives and friends.

Sylvia Louise Cooper, beloved daughter of the late Charles William Hall and Anita Smith Hall, was born on August 17,1939, in Baltimore, Maryland. She was the fourth-born of six children. Sylvia was raised in a Christian family. She was christened... View Obituary & Service Information

The family of Sylvia Louise Cooper created this Life Tributes page to make it easy to share your memories.

A comforting word from you means a lot.

Send flowers to the Cooper family.